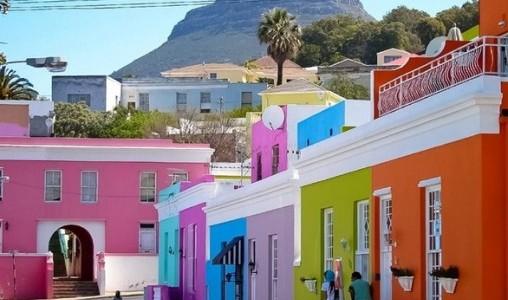 South Africa, and Cape Town in particular, is a place where different cultures coexist like nowhere else in the world. Among the many cultures and communities forming the “Rainbow Nation” is the Cape Malay community, of which members are sometimes also called Cape Muslims.

The Cape Malays are essentially residents of Cape Town and its suburbs. The term “Cape Malay” comes from the fact that the Dutch settlers sent thousands of labourers, slaves and political exiles from their colonies of the Dutch East Indies, where most of the population spoke Malay. This population of slaves and political exiles gradually blended with other populations originating from Asia, India or East Africa and turned into a larger community putting the Muslim religion at the core of its identity.

The main legacy this community kept from its East-Asian origins is the Muslim religion, which is still very prominent today in some neighbourhoods and suburbs of Cape Town. The general Cape Malay community currently speaks Afrikaans, with a lesser percentage speaking English. Although they may no longer speak the Malay languages and other languages their ancestors spoke, various Malay words and phrases can still be heard in Cape Town today. Bring a new cultural side to your Cape Town stay by discovering the unique Cape Malay culture.

Take a walk in Bo-Kaap

Whether you are staying in Cape Town for a weekend or two weeks, this is a part of Cape Town you cannot miss!

A stone’s throw away from Long Street, nestled on the slopes of Signal Hill, is the neighbourhood of Bo-Kaap (literally meaning “above the Cape” in Afrikaans). When wandering through the emblematic streets of Bo-Kaap, namely Wale Street, Dorp Street and Longmarket Street, you will encounter brightly coloured houses, the friendly buzz of the local Cape Malay community, and breathtaking views of the City Bowl, Table Mountain and Table Bay.

Five times a day the muezzin leads and recites the call to prayer from the Mosque; and on Saturday mornings the local inhabitants are often seen chatting on their doorsteps or from their balconies of their brightly coloured houses.

Eat in a Cape Malay restaurant

The Cape Malay cuisine is possibly the most authentic and deep-rooted culinary tradition you will find in Cape Town.

The most famous dishes include the Cape Malay curry, which is a relatively mild curry compared to the Indian Durban curry, Bobotie and denningvleis. Delicious local deserts include koeksisters, melktert and malva pudding.

You will find Cape Malay dishes in most of Cape Town’s local restaurants, but to make the best of the variety on offer you can visit one of these restaurants:

This cemetery is a hallowed heritage site for the Muslim community of the Cape. The earliest and most respected Muslim Imams of South Africa, namely Tuan Nuruman, Tuan Sayeed Alawse and Tuan Guru, are buried in the Tana Baru. This site forms part of a larger belt, or “Holy Circle”, of Kramats. These tombs of the Eminent Imams of the Cape stretch across the Peninsula with sites on Robben Island, Constantia, Oude Kraal and Signal Hill.

When walking up this scenic path leading to the “Noon Gun” and Tana Baru, you will enjoy the stunning views overlooking the colourful neighbourhoods of Bo-Kaap, the City Bowl and Gardens, surrounded by Devil’s Peak, Table Mountain, Lion’s Head and the Atlantic Ocean.

Bo-Kaap is home to several mosques, each of them having its own history and specificities. Visitors are always welcome provided that they show respect and comply with the site’s rules.

The Auwal Mosque is the first and oldest mosque built in South Africa, where Tuan Guru, one of the first Imams of Cape Town, used to preach. The teachings of Tuan Guru and his successors were in line with the Shafee doctrine of the Muslims of Indonesian origin. Hence today more than 90% of the Muslims of Bo-Kaap are Shafee. Since its inception the Auwal Mosque has been a symbol of the struggle of the Cape Muslims for the recognition of Islam and their freedom to worship.

The Palm Tree Mosque is the second oldest mosque in Cape Town and the oldest building in Long Street. This mosque is named for the 2 palm trees that once stood outside this former residence, of which only one remains now.

This Shafee mosque was the first mosque site which was specially granted by the British local authorities, and hence is also known as the Queen Victoria Mosque. The Jamie Mosque is the biggest mosque in Bo-Kaap.

The Quawatul Islam Mosque was built as a result of the large influx of Indian Muslims to Cape Town due to the increasing British presence in the city. By the late nineteenth century the majority of the Muslim people residing in Bo-Kaap were Shafee due to their Indonesian origins. This caused conflict as the Indian Muslims were mostly Hanafee followers and they consequentially erected their own Mosque in Bo-Kaap.

Originally established as a multi-cultural and multi-religious community of freed slaves, merchants, artisans, labourers and immigrants, among which many were Cape Malays, District Six was an emblematic neighbourhood with close links to the city and port and known for its vibrant musical life. By the beginning of the twentieth century, however, the process of removals was launched.

The first to be forced out were the black South Africans who were displaced from the District in 1901. In 1966 it was declared a white area under the Group Areas Act and by the early 1980s, the entire community had been forcibly displaced. More than 60 000 people were removed to the suburban area known as the Cape Flats and their houses in District Six were flattened by bulldozers.

The museum has formed several partnerships with dispossessed communities, both in South Africa and around the world. It is a founder member of the International Coalition of Historical Site Museums of Conscience.

The Bo-Kaap Museum, located in the historic area that became home to many Muslims and freed slaves after the abolition of slavery, showcases local Islamic culture and heritage.

The Museum was originally furnished as a house depicting the lifestyle of a nineteenth-century Muslim family. It has now been changed into a social history museum telling the story of the local community within a broader political and cultural context.

Join the festivities of the Cape Minstrel Carnival

December is the month South Africans await the most. Summer holidays, outdoor concerts, long warm evenings, and Christmas delicacies are all good reasons to look forward to December in South Africa. But it is two days after New Year’s Eve, on January the 2nd, also known as Tweede Nuwe Jaar (Second New Year), that the festivities take their most local and traditional colour, when as many as 13,000 minstrels take the street to celebrate the new year in the most colourful and noisy manner.

Historically, the numerous Muslim slaves and house workers were granted one day off of work in the whole year. This was the occasion to celebrate the new year with a colourful carnival also known as the “Coon Carnival” and “Kaapse Klopse”.

For almost 300 years now, every January the 2nd, men, women and children march through Bo-Kaap and the centre of Cape Town. Elaborate costumes are designed and sewn by local tailors and are kept a secret until the day of the carnival as troupes are judged by their costumes, singing and dancing. Wearing colourful, shiny suits, hats and sun umbrellas, in true Rio Carnival style, the several bands, known as the Cape Minstrels, continue to fascinate both tourists and locals.

The Slave Lodge is one of the oldest buildings in Cape Town. The several names thebuilding was given over its three centuries of existence, namely the Slave Lodge, Government Offices Building, Old Supreme Court, and South African Cultural History Museum - all depict the rich and long history of the building. In 1998 this museum was renamed the Slave Lodge. In addition to the permanent collections depicting the history of slave trade in South Africa, among which the Cape Malays hold an important place, temporary exhibitions explore the long history of slavery in South Africa, under the theme “from human wrongs to human rights”.